History has a way of kicking you in the head when you're looking the other way.  2020 has been difficult year and there's likely to be more trouble to come. Here we look at ways the world is likely to change as a result of recent events.

Fortune telling is not my field so take all of these predictions with a pinch of salt. Any mention of governments is taken with a world view and not specific to any single country.

Many people want to think we are at the beginning of the end but it seems more likely we are reaching the end of the beginning.

In the past preppers and survivalists have been rather conflated and there's been a general view that to be a prepper you need to have a tinfoil hat and a cache of guns. However prepping is about building in robustness to your household to prepare for an unexpected events. These events need not be the end of the world but disruption to supply chains, natural disasters, economic changes and the like.

The many people who experienced anxiety at the start of the recent crises will sleep a whole lot easier at night going forward if certain preparations are put in place such as a little extra food and little extra medicine, backup power to charge mobile phones and small scale PPE such as disposable gloves or masks in the first aid cupboard. Some people panic bought so much toilet paper they’ll likely be prepped in that area for several years without any extra effort. ;)

Prepping is seen by some as expensive, but to give an example around the time of Chinese New Year a special offer meant I could buy a 10 kg bag of Thai Jasmine rice for about the same price as a Starbucks and a cookie. These are the ways a little bit of resilience can be built up in the household overtime but that's a discussion for another time.

The world economy has taken a major hit. Many businesses have been closed, furloughed staff and many people have lost their jobs entirely. Even when the crisis is over as people get back into work, physical proximity businesses and industries where the mood has been soured like cruise lines are likely to struggle long-term. That and the overall shock to the system could well lead to multiyear effects on various economies around the world as a result of this crisis.

Many people have been shocked by the lack of pandemic preparedness demonstrated by some world governments. SARS, MERS and swine flu were all dress rehearsals for recent events and yet some administrations seem to have been caught napping. This is not going to be accepted by the public at large in the medium-term future.

Pandemic preparedness has been shown to be significantly cheaper than actual pandemics, orders of magnitude cheaper in fact. Personal preparation as mentioned before is likely to become more common. Handshakes are unlikely to be such a firm custom in many countries and regular hand cleaning with soap and water should become more prevalent. On the bright side, many diseases will get their ass kicked as we take the issue more seriously.

The many just-in-time supply chains in businesses around the world are likely to be tweaked to include more resilience.

Benign health surveillance will also be promoted. Though the old sci-fi trope of toilets automatically communicating the health of the household or novel pathogens to a central authority is unlikely to be accepted in most polities, it now seems almost likely that screening for such pathogens at municipal sewage works will become a standard especially in pathogen hot spots.

Some governments noticeably South Korea were especially effective at dealing with the consequences of the pandemic. Some other governments seemed to be in denial to quite a late stage and indeed still are in some nations. There seems to be a rough correlation between populist governments and the denial of the seriousness of this pandemic usually down to a playbook of describing anything not fitting their agenda as a hoax.

Perhaps the clear perception of lacking action will allow the world to hit peak populist and perhaps opt for governments with more substance in future. Already a campaign of gaslighting is taking place in various nations stating that that particular government's preparedness and actions have been world class and held up as an example around the world. There's no guarantee that this gaslighting will be successful, plus those suffering economic hardship will take a stern look at any incumbent which may lead to political change.

Disasters and uncertainty give rise to fear. Fear can be very useful as an aid to survival but it also can be very toxic in society. There is a risk of increased xenophobia and intolerance as a result of covid certain ethnic groups may be held up as a source of illness.

Many people have recently been forced to work from home at a much larger scale than has ever happened before. Many collaboration technologies such as Zoom Teams and Slack are likely not going away. As we enter tougher economic times many businesses are waking up to the fact that remote working can save them money on office costs. Since it's been proved that remote working and be perfectly effective any previous objections from more conservative minded businesses are likely to melt away. As such remote working is likely to be much more common in the future.

In a bid to keep the economy alive during the crisis some central banks and authorities have turned on the money printers. It's impossible to print a large amount of extra money without devaluing the money already in circulation. As such some currencies are likely to decline in value overtime. There may be a search for assets which preserve wealth.

Some health systems in the developing world were already stretched and stressed before the epidemic began. It's likely that they will not be able to cope as COVID infection becomes widespread. As a result large scale sustained spread of the virus is likely in many developing countries. Of course this will place a burden on the poor victims who become sick or die as a result of the infection. It will also increase financial distress for those economies making things even worse.

Long-term travel restrictions may be kept in effect on certain nations to prevent covid epidemics being reignited in countries which have things under control. There's another economic and cultural impact.

Recent working patterns have shown that people can be very productive without a daily commute. People can attend meetings without jumping on an airplane plus of course the travel industry has been hit pretty hard. It's likely that these experiences would lead to some permanent changes such as less commuting, less airplane travel and as a result less carbon emissions.

Reducing carbon emissions was almost described as impossible before this crisis but now we have a precedent there may be a stronger push as things recover to make sure that lower carbon emissions going forward are the norm. This will be contested by the usual arguments that the economy cannot grow or thrive without high carbon usage, we shall see who wins out on that argument.  Greta Thunberg will eventually re-enter the news cycle with a vengeance.

The crisis has revealed some clear fault lines in society with many people operating on a budget which only lasts them from paycheck to paycheck without any savings, secure employment rights and lack of availability to affordable health care.

Many people in such an insecure position have been proven to be essential to society in general as they feed us, maintain our utilities and care for us when we are sick. Social stability and public health security are on the agenda. It is being realized that the robustness of society depends on the bedrock of society being as supported as is the rest.

Such a new deal perhaps even a green new deal may eventually be introduced to improve the lot of many people who have suffered during this crisis despite their key role in the prosperity of all.

China launched the Belt and road initiative several years ago and have been building key infrastructure in various points around the world to facilitate worldwide trade. Often the host countries borrowed money from China at preferred rates to fund this infrastructure.

This will give China control over many points of key international infrastructure and solidify China's growing global reach. Further the potentially diminished financial power of various geopolitical rivals to China will also strengthen China's hand. 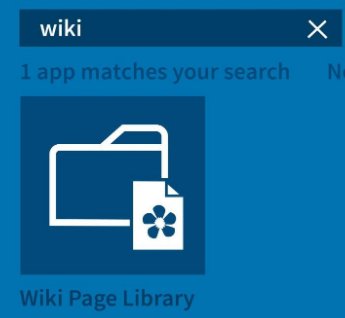 SharePoint Communications sites don't have Wiki Libraries as an option by default. It's easy to enable as long as you ignore the warnings.